Over the past year, new news has appeared in the press on a daily basis that various central banks are experimenting with, or analyzing the implementation of, Central Bank Digital Currency (CBDC) in detail. Perhaps the best is the Swedish and Chinese implementations, where specific test applications also exist and specific deployments are also planned. In this article, we analyze some possible implementations of digital central bank money and the issues it raises.
The “hype” of digital central bank money these days is not entirely coincidental. The following four important market forces influence the topic’s prominence:
- Demand for digital money and digital value transfer services has grown significantly in recent years. This trend is expected to intensify significantly due to the emergence of COVID-19 and similar epidemics. Of course, there are online financial services, but most of them try to digitize the concept of paper-based money well and are not digital in a native way.
- Technological “push”: As a result of ten years of development of the blockchain and cryptocurrency, it has reached the level to implement commonly used digital money systems. Slowly, a digital central bank can also be a realistic technological alternative. In addition, as it is almost completely open source in the field of blockchain, it is one of the most dynamically evolving technologies for value transfer.
- The private sector is beginning to recognize both market demand and technological opportunities, and services are beginning to emerge that could be competitors to even non-digital central bank money. Examples of such projects are stable cryptocurrencies or the Facebook Libra project.
- Last but not least, competition with several central banks is an important factor. The first to introduce internationally accepted digital central bank money can bring significant benefits.
The concept and characteristics of digital central bank money can most simply be summarized through the taxonomy of money. 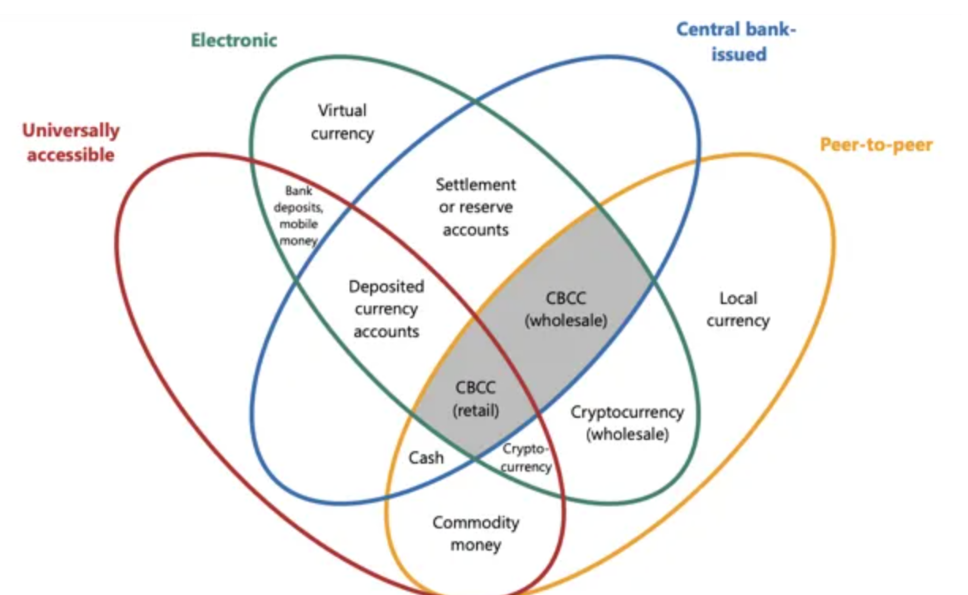 Digital central bank money:
- Completely and “natively” digital.
- Issued by central banks, ensures the stability of the digital money exchange rate and is officially legal tender within the borders of at least one country.
- P2P, if not absolutely necessary for the technological implementation, but at least in the sense that any two persons or companies can exchange values ​​without a separate authorization mechanism for a central actor.
- Available to economic operators. Here, some terminology distinguishes between two different CBDCs: the so-called Wholesale CBDC only allows value exchange between banks and other financial institutions, while the Retail CBDC is available to other actors in the economy.
- Most ideas are that the new digital central bank money would be implemented on a new digital value transfer infrastructure that would be more modern, secure and flexible than current systems.
- Another general expectation is to support open financial digitization and innovation such as programmability, tokenization or nano-payments (micropayment).
The following figure shows a comparison of Bitcoin and a generic CBDC without details of the technology implementation. The most important difference is that while in the case of Bitcoin most of the platform parameters (monetary policy, when and where to access the service) are “hard-coded” in the software, in the case of CBDC they can be defined by institutionalized, e.g., central bank decision makers. 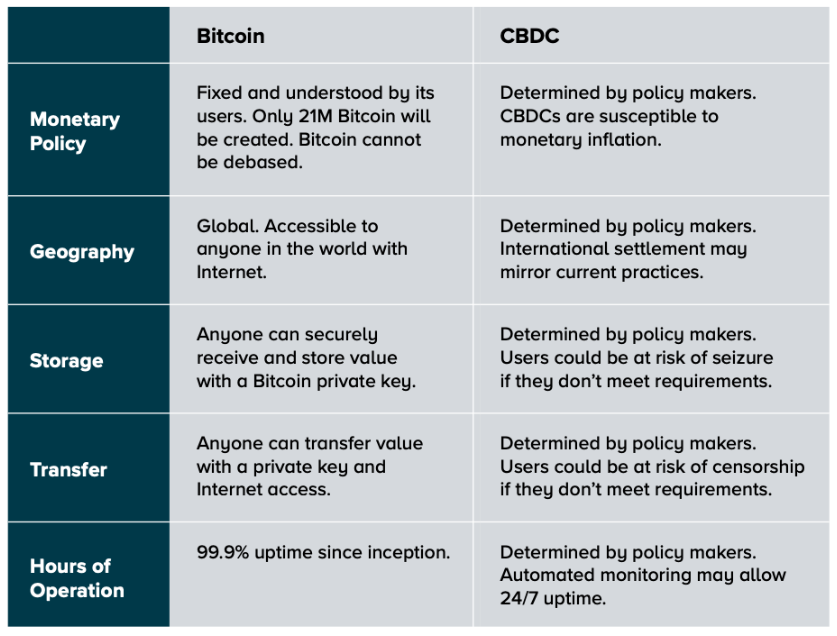 In terms of implementation, two independent dimensions are usually considered. Based on the structure of the CBDC, it can be:
- Account-based: in this implementation, each user would create this online account with the central bank, similar to a normal bank account. However, the advantage of the solution is its ease of implementation, but the disadvantage is that the central bank would have to issue end-user accounts and would be a direct competitor to commercial banks.
- Coin (Token) based: here the CBDC would be implemented with the help of digital coins issued and withdrawn by the central bank, either directly or indirectly through financial institutions to economic agents. In monetary terms, the system is similar to paper money-based systems and requires more, but with a good chance, new financial infrastructure (eg blockchain). However, token-based systems are expected to have several advantages over account-based systems, e.g. decentralization, flexibility, greater security and privacy.
Regarding the structure of CBDC, two main models are known:
- Single-tier: here, the central bank is in direct contact with all economic agents, either by keeping their accounts or by issuing them with digital coins. The disadvantage of this solution is that, as the central bank emerges as a direct competitor to commercial banks, it could cause a restructuring of the entire financial sector, which could significantly shake up overall financial stability.
- The tiered system would reflect the current institutionalized financial hierarchy, where the central bank would provide CBDC services to economic actors not directly but through other financial institutions.
The following figure shows a possible digital dollar implementation with token-based digital dollar issuance and a multi-level structure that would build on the current banking system. 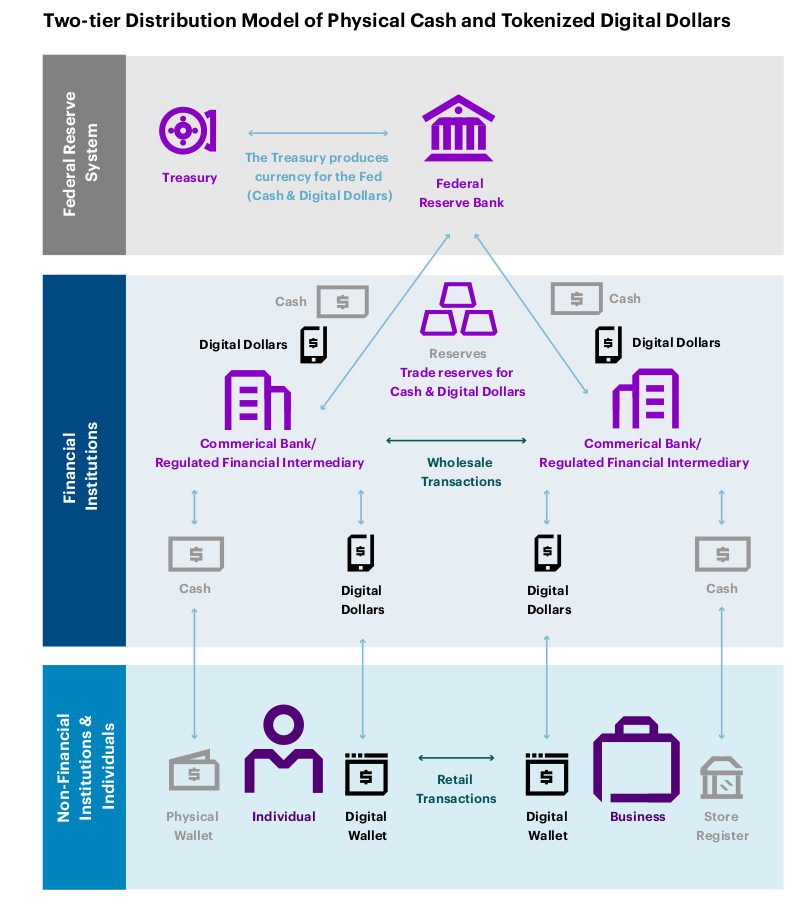 CBDC is often associated with blockchain and distributed general ledger technology. It is important to note, however, that most analyzes also consider multiple technology implementations, such as classical financial infrastructures. The main barriers to implementation with DLT are the scaleability, performance, and privacy limitations of each technology platform. While these are not insurmountable barriers, most blockchains may not be suitable for the full implementation of a CBDC use case without modifications. Nevertheless, successful prototypes have been born with consortium Ethereum supplemented with off-chain channels and on the R3 Corda platform.
The most interesting question, of course, is when the first digital central bank money will be born and what we can try. It is difficult to give a general answer to this, but given that several countries are in a strong test phase with their own currency, it is likely sooner than we think.
Posted by Daniel Szego at Saturday, June 06, 2020

Email ThisBlogThis!Share to TwitterShare to FacebookShare to Pinterest
Labels: CBDC

If you run a parity node one of the most important is to check if your sync is running or if it is stopped for some reason. Making sure that the json-rpc is enabled, you can use two checks:
1. Check if the sync is fully synced.
curl --data '{"method":"eth_syncing","params":[],"id":1,"jsonrpc":"2.0"}' -H "Content-Type: application/json" -X POST localhost:8545
if you get a false for the above command, it is fully synced. Otherwise you get the actual block number where the sync stays.
2.  Even if it is fully synced, the ancient block sync might be running, so the following command has to show that the blockGap is null:
curl --data '{"method":"parity_chainStatus","params":[],"id":1,"jsonrpc":"2.0"}' -H "Content-Type: application/json" -X POST localhost:8545
Posted by Daniel Szego at Saturday, June 06, 2020