At a conference, I was recently asked what I think is the most disruptive technology in the world at the moment. I chose without hesitation, and perhaps surprisingly, I didn’t choose quantum computing, IoT, or even the blockchain, but decentralized artificial intelligence markets.

The topic began to unfold during the 2017 ICO hype, when several competing and similar platforms were launched, such as Neureal or SingularityNET. The basic technical and economic idea is that at the moment, much of the mainstream artificial intelligence and machine learning market is concentrated in the hands of a small number of players who use the results largely in specialized areas. Some of the actors, for example, are cloud providers or social media platforms that use the data collected to make our own product portfolio more marketable, such as more targeted and positioned ads. Other major players are government and / or military uses, which also focus only on specific well-defined areas. On the one hand, the social benefits of these uses are fundamentally doubtful, and on the other hand, smaller firms do not have much chance of putting together the right quality MI competencies and algorithms. Distributed artificial intelligence / machine learning platforms are trying to help with this by virtually democratizing AI.
The basic idea is that many different research universities in the world, or even AI hobby groups, are working on improving various algorithms for each subfield of artificial intelligence. Most of these initiatives can be found, for example, on GitHub, an open source way for anyone to use. However, these initiatives very often do not achieve concrete business realization even if the idea would be commercially viable due to marketing difficulties: In practice, the AI researcher is not a professional businessman, and bringing such technology to market is often even more challenging than usual.
Decentralized AI markets work similarly to, for example, a mobile App store: each developer or researcher can create a specific running service from their own algorithm, the operation of which can be sold through the market and purchased by specific users. For example, if I have a very good algorithm that translates from Chinese to Hungarian, I can implement this idea with a service that I can register for a decentralized AI market. After that, anyone who needs this service can use it through the market for a fee. This award is given to the developer and the creator of the algorithm. One of the great advantages of such market platforms is that not only can end-users use the results of individual AI services, but individual services can also build on each other.
For example, the Chinese-Hungarian translation algorithm is not necessarily bought by end users, but may be built into another MI algorithm that subtitles movies automatically. On the other hand, it is possible that we need other other MI algorithms, such as Chinese or Hungarian dictionary programs, to work. These can also be exploited and incorporated into our own algorithm using the decentralized MI market (Figure 1). In this way, each MI algorithm forms elementary and reusable “lego” blocks that form complex applications for end users. 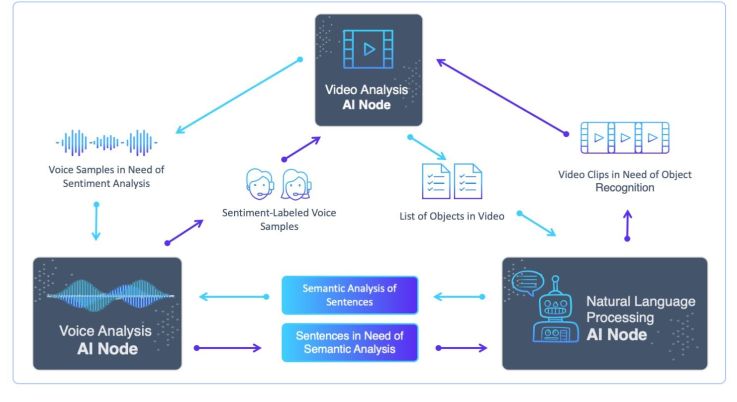 The best known decentralized MI platform is SingularityNET, marked by Hanson Robotics, famous for the Sofia robot, and MI legend Ben Goertzel. The platform has been implemented on the Ethereum blockchain and the IPFS (Interplanetary File System) platforms, however, the architecture is prepared to use other blockchain technology in the long run. Part of the system:
-  A decentralized database (registry) for registering, accessing, and using MI services.
- Market mechanisms / MI service for the sale and purchase of token system and related components such as crypto wallet.
- Components that facilitate the use of the MI service, such as off-chain chanels to implement fast and low transaction fee token transfer.
- We provide services to facilitate the implementation of development tools and libraries. 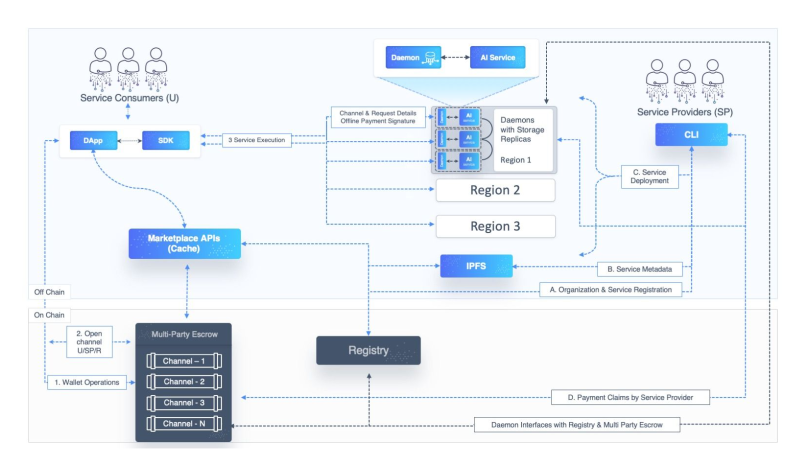 However, apart from the fact that decentralized MI platforms are trying to fill an actual market niche in the short term, several initiatives have much more ambitious goals. Most successful MI applications on the market try to provide a dedicated solution for a relatively narrow spectrum area, such as recognizing special patterns and shapes in images. These so-called narrow MI (narrow AI) solutions can sometimes work more effectively than human problem solving, but only in a specific narrow topic. Some initiatives, such as SingularityNET, ultimately aim to create artificial intelligence systems that deliver performance comparable in all respects to human thinking and problem solving (so-called AGI - Artificial General Intelligence). There are several theories that such general artificial intelligence can be achieved by some kind of network-based interconnection of narrow MI systems:
-    On the one hand, in artificial intelligence theory, so-called agent-based systems attempt to achieve much greater problem-solving capacity than separate components by combining independent MI components (so-called autonomous agents) (e.g., Marvin Minsky - Society of Mind).
-    On the other hand, some neurobiological research also shows that the human brain and intelligence are based on the cooperation of several highly specialized subsystems in different places.
Of course, it is an interesting question whether this kind of general intelligence can be created in this way at all, and it actually reaches the human level in problem solving. This can probably really be seen when one of these platforms reaches a critical mass: a large number of MI services are implemented that interact strongly with each other. Until then, however, the area provides a solution to a valuable market niche: quality MI services can be provided and received efficiently in a decentralized manner.
Posted by Daniel Szego at Friday, November 27, 2020