Creating a blockchain algorithm that can not fork 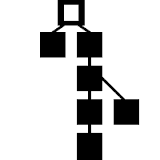 Creating a blockchain algorithm that can not fork is actually not so complicated. What we need to have is a mechanism to make sure that we know all of the miners or validators in the system. This might be a special transaction that can be initiated by a node that wants to join. This special transaction is mined or validated in a standard way and added to the list of  active miners or validators that can be stored in the ledger in part of the on-chain governance.

After that the blockchain consensus algorithm has to have two rounds:

1. with the help of a Nakamoto consensus the next block can be found, however this block is still not applied to the state. The block is considered as a proposed block at first.

2. The proposed block must be signed by more than 66% of the active nodes to be considered as valid and be applied to the state. Certainly, such a signing and voting process is not something that can necessarily efficiently realized on a global scale considering many active nodes.

3. Last but not least, a deleting voting peers mechanism can be built in a garbage collection style. If a node do not have active vote for a long time, it can be considered as it has already left the active miner or validator nodes.

The algorithm can guarantee the working mechanism without forks, as in case of a network partition there would not be enough votes for a given block. Certainly, there is no magic, in such a case, the network would simply stop working. We simply prefer consistency against availability in case of network partition, according to CAP tolerance.
Posted by Daniel Szego at Sunday, December 02, 2018