Competitor landscape has been analysed with the help of two frameworks. Figure 1 uses the classical ambition matrix positioning Decentrlised Business Process Management or simply DBPM as a rather further out than closer in innovation. We positioned multiply version of DBPM on the market segment, because creating a cross-company business process between two companies should not necessarily be regarded as a new market, perhaps not even emerging. However creating business processes between companies, individuals and IoT devices surely manifests as a new market segment. 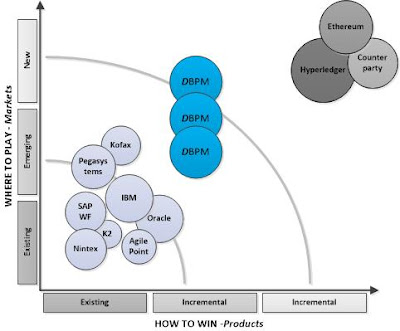 Figure 1. Industry and competitive analysis with ambition matrix
Figure 2 summarises the competitors on a rather architectural way concentrating on two dimensions:
1.  At the dimension of high trust architecture the question is if the technology is based on Blockchain, providing a scalable high-trust architecture by design, or on a classical client-server framework (or perhaps old fashioned mainframe).
2. The diversity of actors analyses how many different parties should be considered for a business process, ranging from a one-company process to the processes of multiply companies, individuals or intelligent gadgets. 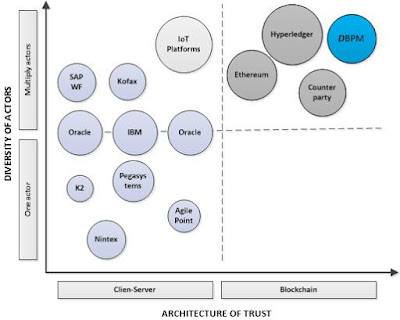 Figure 3. Solution segmentation
Based on the two orientation diagrams as well, we would argue that enterprise ready classical Business Process solutions should be regarded as direct competitors of DBPM. They do not necessarily focus directly on a cross-actor market, apart from some examples like Kofax, but enterprise ready basically means that they can be extended with some further development on a cross-company or even cross-intelligent gadget scale. For example some of the ‘big players’, like Oracle, IBM, or SAP implement cross-company functionalities as well. However on the one hand they are not based on Blockchain solutions on the other hand they require that the same solution is installed and licensed in all of the trusted companies, like SAP processes between subsidiaries of a company. Enterprise business process solutions can clearly compete on a markets where processes between a few previously trusted companies should be implemented, but they will have the weakness as soon as processes between a larger numbers of untrusted actors should be set up.
As indirect competitors we regard the whole smart contract market, including general platforms, like Ethereum, Counterparty (Bitcoin based smart contract system) and systems like Hyperledger. These platforms clearly provide the possibility to set up trust between different untrusted actors based on smart contracts and Blockchain, however they have rather a general focus and not a BPM specific one. As an example a specific decentralised business process can surely be implemented as a set of hard-coded smart contracts, but hard-coding one such a company cooperation is completely different from providing a whole platform on which such processes can be practically clicked together. Nevertheless the risk that someone develops a competing solution on top of these frameworks is surely bigger than zero.
Companies who do something in the direction of multi-party trust system or business rules can be regarded as potential competitors. The range is here pretty big, starting from business rule engines like Decision, through digital business logic platforms like Drools, to general IoT solutions, like Ritc. They seem to be pretty far from DBPM at the first sight however they have a similar and strong technology basis that can be further developed in the direction of decentralised business process management without too much effort.
Based on the previous analysis our competitive strategy is based on two major building blocks:
1.  Decentralised processes among large number of possibly different kind of untrusted parties, including companies, individuals and intelligent gadgets.
2.  Low code solution in cooperation with local consulting companies of different industrial fields, making possible that decentralised processes are set up directly by the local experts of a certain field or even by end-customers in a self-service way.
We see that the market is pretty much in the emerging phase, hence the strategy is based on segments, like IoT communication that are emerging markets themselves. As a consequence we see the market and our competitive strategy as a blue ocean one.
Posted by Daniel Szego at Monday, December 12, 2016