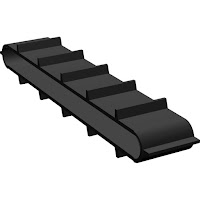 Combining a conveyor belt with artificial intelligence is a dream that sounds for the first run pretty much as science fiction. However there a realistic chance of realizing such an algorithms. Let we imagine a configuration space with CU = {cu1,cu2,cu3 ... cuN} different configuration units where each cui configuration unit has a cui = {c1,c2 ... cki} set of different configuration possibilities. General software architectures can be regarded for instance to such systems, they provide many functionalities and which can be configured and put together in many different ways. In this example, we consider the configuration space as independent elements, however in general case they might be dependent from each other.

The major task of a conveyor belt learning algorithm is to analyse different choices of the configuration space and create or estimate a human configurable conveyor belt automatically with the help of statistical analysis or machine learning in order to capture the choice pattern that can be used in most of the situations.

Domain specific languages can be also regarded in a way as special conveyor belts that are capable of realizing only parts of a theoretical configuration space. Unfortunately there is know known method to integrate with the artificial intelligence or machine learning. Perhaps such a theory could provide the basis for the integration.

Another open question if conveyor belts can be built up a modular or even modular and hierarchical fashion and if they can be supported by efficient machine learning algorithms.