An attempt to define the field: Machine Assisted Human Intelligence

At the beginning of the second machine age, life has become increasingly complicated especially if someone works usually online. The reason for that is simple, the amount of knowledge and information that can be easily accessed online has been being boomed in the last couple of years on the one hand because of more and more people getting online and sharing directly or indirectly information. On the other hand, we are at the age of an IoT revolution as well, where not only people, but billions of intelligent devices are getting online, implying a huge wave of device generated data.

From an evolutionary and biologically perspective this situation is something that is pretty new. We have been aware of the limit our physical body and human perception for thousands of years and we have been making contiguously attempts to overcome these limitations. Examples ranging from the tools of the prehistoric age via the steam engine to the industrial revolution. As an example, let we consider the capability of the human body to be able to lift at most around 100 kg. That is known to be too little already several thousands of years, implying inventions to overcome the limit from different lifting devices to different crane tools. Another well known example is the limitation of the human perception not to see in the dark. Attempts were made to overcome this limit from simply lighting a fire in the prehistory age to the nowadays night-vision systems. However information overload is something that is from an evolutionary point of view totally new. The amount of information throughout the world was something that one could overview even hundred years ago. Nowadays, the existing information is being doubled in each three years, everything is online, everything is real time and in certain fields you need pretty much of it to work or to make decisions. The human brain is simply not capable to work with such a huge amount information and well as the requirements are pretty new, we are simply not sure where exactly are our limits.


Good examples are for instance many IT fields, like cloud computing. The field did not exist 10 years ago, despite nowadays there are thousands of books of information about and it is being continuously increased. Working in a field like this requires huge amount of time to simply keep up with the information without doing anything productive. There are not many companies and business models that can support such a thing. As a consequence the need for extending information processing limits  of the brain is an always increasing and demanding field.

On the other hand current trends of artificial intelligence and machine learning provide many intelligent tools that could be efficiently used extend the limits of the humans' recognition and information collecting process. These fields have rather the focus of creating something that is thinking - working - acting similarly as a human. However with the little refocusing the tools might be used not to copy something that already exist and slowly will not be sufficient for the modern world requirements but rather to extend the human's thinking capabilities. Certainly it should be analysed which AI tools and methodologies can be really used in this field as well: rather methods that produce at the end symbolic results in a human understandable way. With other worlds, let machines support our cognitive capabilities by gathering, analyzing, structuring and storing data.


In this sense the field is located somewhere between cognitive science and machine intelligence, having perhaps more general elements from computer science (Figure 1). 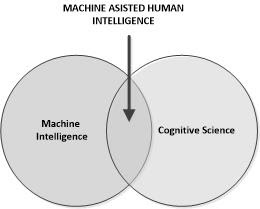 An example for such an ecosystem which already can be found practically in each car is the navigation system. The navigation system extends the human memory simply by storing all of the required maps. It helps with the integrated decision making by collecting online data about traffic collecting both from individuals and from automatic sensors as well, practically realizing an integrated knowledge discovery environment as well. Advanced navigation systems take into account the experience and preferences of the driver as well, providing at the everything on a human readable interface (which I would say can be further developed in the future).

Another innovative field that is emerging at the moment and can be regarded as machine assisted human intelligence is the robo-advisory trend of the fintech industry.
Posted by Daniel Szego at Monday, January 09, 2017