There a fundamentally difference between the supply curve of an IT good and  the mass production of a material good. At both cases there is a certain prize on which it is practicable to consider something as a mass production. On the physical goods it means practically building up something like conveyor belts to for producing efficiently. However, despite of conveyor belt the variable cost of a product will be bigger than zero meaning that producing more and more is manifested in more number of or more efficient conveyor belts. On the other hand, reproducing an IT good or service if the platform already given requires practical zero additional cost, meaning that as soon  a profitability point is reached to build up automated platforms for mass production, the supply will be practically infinite. 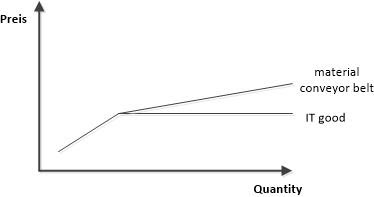