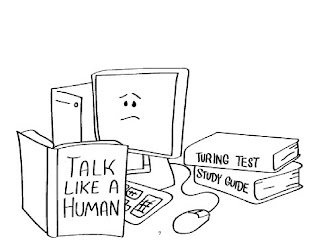 Turing test :"The Turing test, developed by Alan Turing in 1950, is a test of a machine's ability to exhibit intelligent behaviour equivalent to, or indistinguishable from, that of a human" - Wikipedia.
But how about on sub domains where the Machine intelligence actually beats the human ones, like playing chess ? Does the definition make sense ? Supposing that the machine intelligence is better, is there actually a chance to evaluate from humans? As the definition was perfectly working 50 years ago, it is getting to seem to be a little paradox.
Posted by Daniel Szego at Monday, April 24, 2017