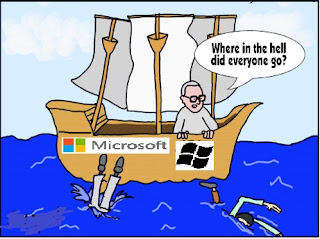 Microsoft used to be a pretty ambitions company that tried to compete with the whole IT world almost in every possibly segment. The strategy was actually, simple they produced a lot of different products and services that were sometimes probably not best in the world but with two simple strategies it was despite possible to compete with the rest of the world:

2. Community: there was a relative big and convinced community, that helped both at bootstrapping the new products and knowledge based and at pushing the sales further even with products that were perhaps not the best on the world.

However, this strategy has been pretty strongly changing for 3-4 years; the new strategy seems to have the following properties:

2. an implication of giving up the technology synergy that only world class services and products can survive, and well actually it seems Microsoft tries to cancel 80% of its technology portfolio. There seem to be 2 main focus of the strategy Azure and SQL server, and perhaps 2-3 elements that will somehow further exist like Windows but only at some client applications, Office in an online form and so on. I seems all the other products are actively being cancelled, like classical development directions (.NET, C#, classical Visual Studio or TFS), Windows as a server solution or the whole mobile direction.

3. with the aggressive and fast cancelling of the existing product lines both the community and the existing customer base seem to vanish. And I think this advantage can not really be reached back again, even with slogans like Microsoft loves Linux, there is not much chance that the old fashioned Linux customers or community members change to Microsoft.

4. the new and innovative direction seem to be pretty much questionable:
- The future of quantum computing is pretty questionable, on the one hand it is not sure how fast an industry scale quantum computing can be reached. On the other hand, companies like IBM have got ten years of first movers advantage in the field, like having put onto the market online collaboration platform for quantum computing.
- Virtual reality and augmented reality will have the first big success in two fields: gaming and porno. Due to market success, both the hardware will be cheaper and a big developer community will appear. As a consequence, Microsoft will have an over-prized hardware with a developer platform, that is used only by a couple of developers.
-  For artificial intelligence there is a pretty strong competition on the market, like IBM Watson, or Google Deepmind. I think the field has got again a high competition and it is highly technical, so Microsoft surely needs to produce more than some fancy chatbots.

5. on the top, there are some signs that are rather annoying:
- focusing and communicating too much about the internal reorganization is always a sign that the company did not really succeeded to do anything powerful with the products or markets.
- having over-positive communication and a lot of emotional elements in the communication, like story telling is usually a good way to put the stock price high (and sell before the price collapse).

As a result, the question is raised naturally: Will Microsoft go down ?