Blockchain platforms are not really optimal in the sense that actually immutability is not always an option for many different applications. Such an application is for example a GDPR conform identity management which should have the possibility to delete data or modify data in a final way, meaning that old versions not remaining in the blockchain.
One way of doing it can be simply resting the hash pointer chain time to time and forget the old values. Certainly, the problem is that at reseting the pointer, the whole system will be very much vulnerable for the different kind of attacks. This can be avoided by using two independent hash pointer chains and resting them with a delay, meaning that at resetting a hash pointer p1, the variables still need to be compatible with hash pointer p2, like on the following picture: 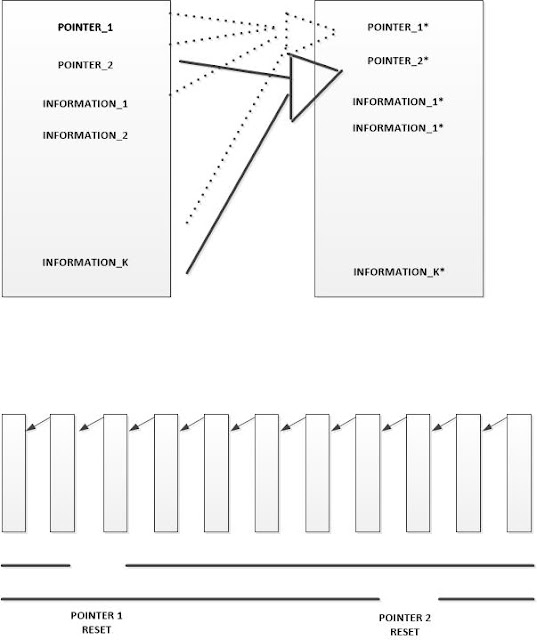 Certainly, such a system has less security than a classical blockchain solution and it can be embedded easily into a state based solution, and not so easily into an UTXO based ones. Further consideration is required if both transactions and state variables are stored as information. Certainly, the logic should be applied to the state variables and indirectly to the transactions. The system might be combined with classical Blockchain solutions as well, separating between variables that should be persevered in the blockchain forever from those that should be persevered only for a given time frame.
Posted by Daniel Szego at Thursday, July 26, 2018