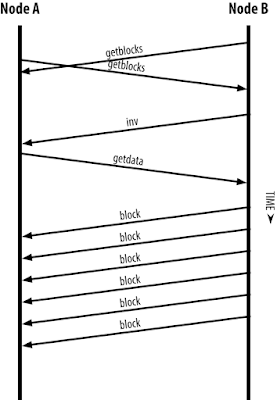 Supposing we have a multi-hash blockchain, there are several ways of synchronizing the blocks. In all cases however, at the "inv" call not only the block headers but the hash policy has to be transferred. If it is a simple multi-hash blockchain containing only one pair of hashes, then based on the inventory and retention policies, the node can synchronize from the last but one hash pointer reset.

If it is a hybrid blockchain containing immutable hashes and hashes with limited retention policies, then the situation is a little bit more complicated. From a practical point of view there are multiply parallel coexisting blockchains where the hash headers of the longer retention policy variables can be hashed in the shorter ones, however not in the reverse direction. At the synchronization a block has to be asked either by the shortest retention time block header, or by all possible block headers. Similarly at the information transfer it should be paid attention that expired block information should not be transferred.