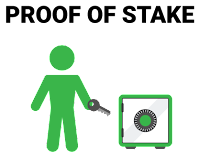 Previous idea with the deletable blockchain platform can not only be realized in a quorum or consortium pattern, but with the help of a delegated proof of stake mechanism as well. In delegated proof of stake, like in EOS, some delegates are elected by the community of nodes either by an explicit voting mechanism or somehow indirectly with voting by cryptocurrency stakes. To produce a valid block, a majority of the delegates have to agree in the block and sign it. Similarly an external data that is not part of the chain can be validated by the delegates and signed by them. Certainly, there should be a cryptographical or cryptoeconomical mechanism that guarantees that in a round the same piece of information is not signed two times. The signature should be realized by one time keys of the delegate nodes, in order that the we can be sure that the given information was signed in the given round. As the information is not stored in the blockchain self, the architecture does not guarantees that the given information exist, if the information exist however we can 100% check if it was signed by the blockchain itself.

The external information to be signed can a block of an account - state based blockchain system, where certainly validity of the blocks and transactions must be checked by the delegates during the signature. There must be a mechanism making sure that the last, or last couple of off-chain blocks are stored, but regarding older blocks, the should not necessarily be stored. They can be deleted without causing consistency problems in the chain.
Posted by Daniel Szego at Tuesday, December 11, 2018