Secure multiparty protocol on the blockchain 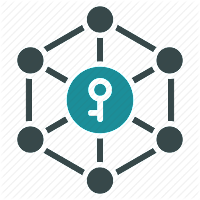 Implementing a secure multiparty protocol on the top of the blockchain requires some special considerations. Examples might be for such protocols if semi trusted actors want to communicate with each other with the help of a consortium distributed ledger solution, like sharing salary data on the blockchain in a way that only average of the salary will be available, or similarly aggregating ghg emission data on a consortium distributed ledger, in a way that the emission data of the individual companies are not revealed only sum of the data.

A secure multiparty sum might be implemented on the blockchain with the following steps:
1. Each participant {1..k} generates off-chain a private and public keys
2. Each participant publishes the public key to the chain.
3. Each participant has a Vi value that should be summarized with the help of the secure multiparty protocol.
4. Each participant splits the Vi value into randomly into k pieces {v1, v2, ... vk} for each node.
5. The values are encrypted by the public keys of the participants, in a way that the first value ifs encrypted by the public key of the first node, the second value in encrypted by the public key of the second node and so on, forming {E(v1), E(v2), ... E(vk)} encrypted values for each node.
6. All of the data is published to the blockchain forming practically as a trusted communication channel.
7. Each node selects the data from the blockchain that is encrypted with its public key and decrypts them with the private key. At the end each node will know k pieces of decrypted data in a way that each value comes from different nodes.
8. Each node creates an individual sum of the different values, cause that the same summary is manifested at each individual nodes.
9. As an optional step the produced data might be published to the blockchain as well. We can build in here some kind of a Bytantine fault tolerance, like in a way that the sum values are published with the help of blind voting algorithm, where we can choose the sum values that is chosen by most of the participants (supposing that most of the participants are honest).
Posted by Daniel Szego at Sunday, December 16, 2018